Nestled in-between the busy commuter stations of New Cross and New Cross Gate is the wonderful Mughead Coffee; a relative newcomer to the coffee scene in South East London, having opened just six months ago. Sitting in the cafe for just a couple of hours, you can see the place is already bustling with rushed commuters, weary students (from the nearby Goldsmithâ€™s University, just a minute away) and cheerful locals, giving the cafe a warm sense of community, which is exactly what owners Star and Mark wanted to achieve.

The first time I met both of them was at our roastery in Bethnal Green. They had recently moved with their two sons from Calgary, Canada, to set up a new home and be closer to family here in London. They came in for a meeting to discuss their options for coffee and equipment, adamant they wanted to be known as one of the best spots in the South East for coffee, without having ever pulled a shot of espresso before! After a quick tour of the roastery, during which I saw their gentle but determined characters, I knew they would succeed.

A wave of training sessionsÂ followed this first meeting and our bonds grew stronger. With Mughead Coffee being the first cafe I would train from scratch to opening day, this felt like a personal project, and to their credit, Star and Mark absorbed every bit of knowledge like sponges.

Detailed information on espresso recipes, technique, origins and latte art seemed to come as second nature to them, nailing each aspect of the process after just a few attempts. Their first employee, Hannah, formerly of The Breakfast Club, came for in for a later training session with a beaming smile and was instantly confident and proficient in her ability, giving me a run for my money with her latte art skills.

When it came to deciding on equipment, they both understood that as much as quality is the goal, consistency is too. Opting for the all-star line up of the Victoria Arduino combo – a Black Eagle VA388 and Mythos One for espresso, and MahlkÃ¶nig EK43 and Marco Jet 6 for filter coffee, they were more than halfway to achieving these goals. Our Red Brick sits in the hopper for espresso-based drinks, and a rotating option of one of our filter coffees is always available freshly prepared. Today, I had a delicious brew of our Ethiopia Wegida, extracted perfectly to highlight itâ€™s peachy, tropical sweetness.

Itâ€™s an easy place to lose track of time, with laid-back seating and touches of Starâ€™s influence as an artist appearing around the decor of the cafe. A projection on a blank back wall can absorb you, with silent videos like an old Charlie Chaplin-style sketch or a never-ending train journey through the Norwegian countryside showing. There is also a basement level to the cafe with additional seating and on-going exhibition space for local students and artists.

The food is not to be overlooked either. The scent that rolls through the air every thirty minutes or so, is that of sweet, sweet cinnamon heaven. Anyone whoâ€™s walked into Mughead or has seen any of their devilish Instagram Stories, canâ€™t say that they havenâ€™t been tempted by their in-house baked cinnamon rolls, generously slathered in cream cheese. Youâ€™d be lucky to walk in and grab one straight away – the rolls usually sell out before theyâ€™ve even come out of the oven, as people sipping on their lattes and filter coffee in the cafe are eagerly awaiting the delivery of a warm, spiced delight from a fresh batch.

And sold out they were during myÂ visit to the cafe, but it being pre-9:00am I needed something a little more nutritional anyway, so opted for the aptly named â€˜Eggy Bagelâ€™. A warm, toasted bagel with an omelette, fresh yellow pepper, tomato and aioli. The flavour combination transported me straight to the Mediterranean, a nice pick me up from the dreary, cold Lewisham weather.

The most striking thing of all when you enter the cafe is being greeted with a warm welcome, every time. There truly is an attempt at becoming part of the local community, with every member of staff being attentive and generous with empathy, and this paired with their high standards for quality makes Mughead a true staple for the London coffee scene. 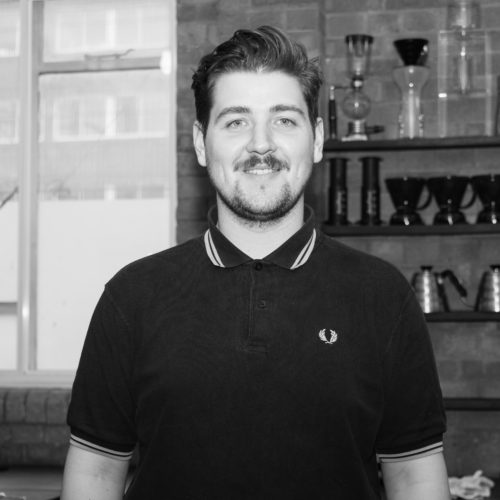 Gareth is our Training Manager here at Square Mile. Find him in our training room dialling-in espresso or trying out the newest brew method, with his French Bulldog, Coppa, by his side.